Mr. Robbins’ Neighborhood is a little bigger and a litter better for the 2017 Game Plan Camp at the Andrews Institute for Orthopedics and Sports Medicine. Nearly 70 young athletes and parents joined Fred and Tia Robbins on Wednesday during the first day of the camp. The total nearly doubled the previous years’ attendance according to Fred. In addition to learning about football from the former Super Bowl champion defensive lineman, attendees also listened to a lineup of guest 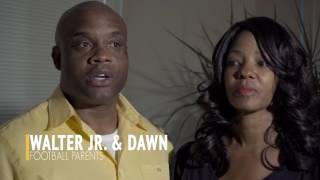